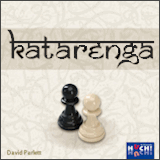 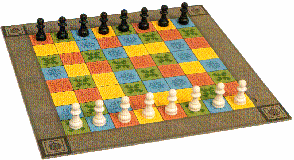 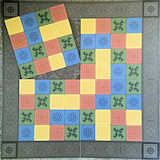 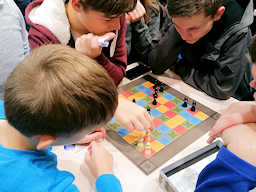 A card game won by the first to play out all their cards. The cards show different numbers of chickens and you turn them one by one from the top of your hand, adding them up as you go. If you bring make the total exactly 21 you sweep them aside and play out as many more as you like, but if you 'bust' you must take all the cards played and add them to your hand. If you’re frightened of busting you can ‘chicken out’ instead, and then get rid of some more. Foxes are jokers that sometimes help and sometimes catch you out. Not a game of great skill, but more fun the faster you play. Chicken Out! has won a Creative Play award from Toy World (category: Indoor Games 8-11 years). It's based on my original card game Bravado played with a standard pack. The Russian version, with circular cards, features hares instead of chickens (so I call it Scaredy-hare).

So-called 'Roman Poker' (it's not really a form of Poker) is all that remains of a Roman chariot race game called Right Round Rome, which half a dozen manufacturers liked enough to play-test extensively before deciding that it was too complicated. So I ditched the board and concentrated on devising several mathematical games to play with the dice alone. Johannes Krenner, of White Castle Games, added some Joker cards to turn it into a longer and more of a family game for two to six players.

Originally published 1982 by Skirrid International, more recently by Gerhards Spiel+Design with additional rules for playing a competitive two-player game. (Publication ceased in 2019 on grounds of cost).