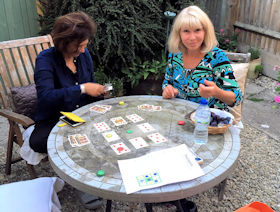 Padma and Nelli keeping track of tricks
(photo courtesy of Nigel Parker) a cross between a board game and a card game, is another variation on the theme of seeking to win a precise number of tricks. The basic game, as described below, is for three, but there is also a version for four (in partnerships).

Equipment
The game is played with a 36-card pack consisting of A-K-Q-J-10-9-8-7-6 in each suit, plus - (If you haven't got a spare pack you can draw up a 3 x 3 scoreboard instead. In this case you may, for convenience, want to stick to the same arrangement of numerals throughout. I recommend that shown in the diagram, namely A-5-6, 4-Q-3, 8-2-7.)
Set-up
Arrange the nine odd cards in a 3 x 3 grid with the Queen in the middle. It doesn't matter how the numerals are arranged - in fact, it's best that they differ randomly from deal to deal. These are referred to as the scorecards.

Each player takes six counters of one colour.

Shuffle the playing pack and deal 12 cards each.
Object
To get three of your counters

A critical position for all! Yellow wants 5
to win, or 0 to stop Red and possibly
Blue,or 2 to stop Red, or 7 to set up
two potential lines of three. Red wants
2 to win, or 1 to stop Blue and set up
two potential lines of three. Blue wants
0 or 1 to win, or 5 to stop both Yellow
and Red. If Yellow wins 5 and Blue 0,
both will have a line of three,
but Yellow will win by 12 to 7. If Red
wins 2 and Blue wins 1, both will have
a line of three, but Blue will win by 13 to 7. in any three-card row, column or diagonal of the scoreboard. At the end of each hand you place one of your counters on the scorecard corresponding to the number of tricks you took.
Trumps
Establish a trump suit as follows. You each choose a card of the suit you propose as trump and, when all are ready, reveal them simultaneously.
Play
The player at dealer's left leads any card to the first trick. You must follow suit if you can but may play any card if you can't. The trick is taken by the highest card of the suit led, or by the highest trump if any are played, and the winner of each trick leads to the next. If you win more than eight tricks, give each subsequent trick to either player of your choice, who then leads to the next.
Score
At end of play, you each place one of your counters on the scorecard representing the number of tricks you won. However:
Game
You win a game by finishing with three counters in a row, whether horizontally, vertically or diagonally, after everyone has recorded their score. If two or all three players achieve this simultaneously, the winner is the player whose line of three cards has the highest total face value.
Match
A match is won by the first player to win two games in succession, or three games in all, whichever occurs first. Randomly rearrange the numerals A -8 for each new game.

Deal 13 cards each from a 52-card pack. Players sitting opposite each other are partners and may seek to cooperate with each other. Each partnership shares six counters of the same colour between them.

Fix trumps by each selecting a card and revealing them simultaneously. If two or three are of the same suit, that suit is trump - unless there are two each of two suits, in which case the hand is played at no trump, as it also is if all four are different.

Play as described above. Each partner places a counter of their colour on the scorecard corresponding to the number they took individually, so it is possible for two counters of the same colour to be placed at the end of the hand.

If both members of a partnership each win the same number of tricks and are already occupying the scorecard corresponding to that number, they must remove their counter from it.